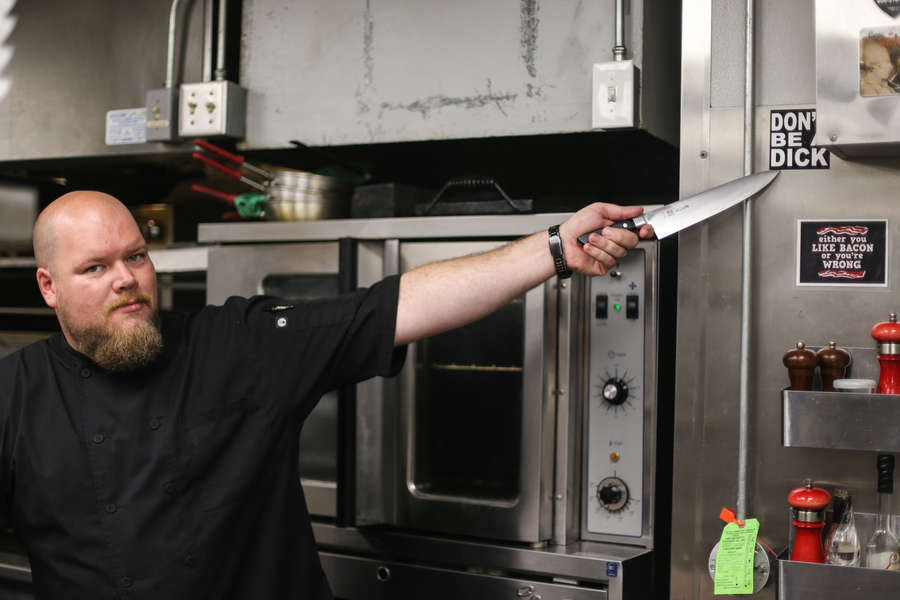 A healthy restaurant ecosystem has many components: a charming front-of-house team, cunning managers, and a motley crew of underpaid misfits that are actually cooking your food.

Unless you’ve worked in a kitchen, it’s hard to understand the chaotic dance of a dinner rush. Coded language, constant personality clashes, and thick-as-blood camaraderie are side dishes to every entree you’ve ever ordered.

To turn the world of cooks into an open kitchen, we asked back-of-house staff from around the country to enlighten us on some of the things that they’re always having to explain to their friends who they only get to hang out with on Monday nights.

Salt and butter are everywhere

Cooks don’t get tipped out

If you’re going by the book, it’s illegal to force employees to pool tips for back-of-house workers. Therefore the kitchen is always making way less money than the servers.

“No, I can’t just take Saturday night off…”

Not Friday either. But are you free on Monday?

Kitchens are both mentally and physically draining

Dead, in jail, or in the hospital…

No other excuses. You’re expected to perform flawlessly at all other times, even if you’re sick, hungover, grieving, or heartbroken because you found the person you love screwing someone else because you’re “never around.”

You get really gnarly scars

Also, say goodbye to the feeling in your fingers.

It’s crucial to say things like “corner, behind, sharp beside, hot.”

Being a good cook at home with friends and family is absolutely nothing like cooking in a restaurant kitchen.

You stand for 10 hours with no breaks

That’s not to mention dead-lifting a 50lb box of frozen chicken while stooped over in the freezer while your non-slips are freezing to the ground and you are rushing to put away the order because you are now down a guy because he took two fingers off in the Robot Coupe and your kitchen manager had to go with him to a hospital because he doesn’t speak English and may be in the country illegally.

Unless they’re wearing a chef’s coat, people in kitchens are generally treated like they don’t exist. Treat them like human beings, and you’ll likely be rewarded.

If you have time to lean, you got time to clean

This is manager-speak for “There are innumerable things to do constantly in a professional kitchen. Rarely is there time to chill.”

You answer someone with a clear “yes” or “no”

Anything else is too ambiguous.

Urgency and precision are paramount

It’s OK if Bob in finance doesn’t have that report ready yet. It does matter if Mikey on fish doesn’t have that sole cooked at the right time and for the right amount of time, because if it’s there a minute too long, the 50 other items and dishes stacked behind it begin to slip into oblivion.

Your day off isn’t for hobbies

Most cooks eat like 3-year-olds. You’re tasting a dozen things at all stages of cooking, sweet after savory. It makes you not want to eat, and when you do it’s generally hunched over a trash can.

After you’re used to cooking for hundreds of people a night, making one cup of rice seems impossible.

Even in scratch kitchens, 98% of everything is prepared ahead of time

Kitchens spend all day prepping for dinner, so while a special order might not seem like too much trouble, it puts a wrench in six hours of prep and the next six hours of muscle memory.

The kitchen has read your Yelp reviews

They may seem masturbatory, but you’re actually screwing someone else over.

Surplus goes into the family meal. More often this is to test out new menu items.

Menus are based on kitchen limitations

There’s only so much space on the grill. A grilled salad might sound like a great idea, but odds are a small kitchen needs those grills for steaks.

Don’t ask, “Why don’t you work somewhere that pays better?”

Odds are cooks didn’t choose their careers based on finances.

Most floors are slightly pitched for drainage purposes

So without thinking about it, you’re balancing yourself constantly. That’s why your legs feel like you’ve run a marathon when you get home and your calves have wicked definition.

Lead, follow, or get the hell out of the way

If you can’t keep up, you had better find some sort of use for yourself to avoid becoming a weak link.

And they’re all pretty okay as long as they don’t screw you over or steal money.

There’s no such thing as personal space

No matter how hot it is, don’t drop it

Refer to the note about losing feeling in your fingers.

Everything is very specifically labeled

The kitchen is already cleaning up.

When your rec-league softball team decides to come for lunch…

For God’s sake, call ahead.

It gets really hot

Consider how hot it gets in your kitchen. Multiply that by eight hours and hundreds of plates.

You’re not paying $18 for a pork chop

The cost of that entree also pays for the electricity, bussers, napkin-cleaning service, dish washers, cooks, and waiters. You’re not paying so much for the food, but rather for the fact that you don’t have to clean up after your damn self.

Dating someone who works in a kitchen is tough

The hours are long and hard and irregular and late. And once you get off at midnight, you’re both equally exhausted and amped up, a problem generally solved by silent beer drinking.

There are two ways to break tension

Either by snapping at someone or making a joke. Each have different applications, but both are equally important.

Sign up here for our daily Thrillist email, and get your fix of the best in food/drink/fun.

Dan Gentile is a staff writer at Thrillist. He worked in a kitchen for a year during college, which is the equivalent of one week in cook years. Follow him to unevenly julienned tomatoes at @Dannosphere.

Save on Henckels knives, Rachael Ray cookware and more