I’ve long relied on the Philips Sonicare FlexCare Platinum as a quick fix for such issues. This handy device bathes a pair of toothbrush heads in ultraviolet light, zapping germs and keeping the brush heads in a sealed chamber until their next use.

The Philips system works great—or, at least, it works great at keeping me from fretting about airborne feces on my toothbrush. But it does have one flaw. It’s quite homely, better suited in design for a dentist’s office than a consumer’s bathroom.

With its Sonic Toothbrush, Tao Clean aims to combine style and function, radically rethinking the electronic toothbrush with design squarely in mind, while outfitting it with a similar UV-based cleaning system.

The design of the base station—which charges and cleans the toothbrush—lands somewhere between a single bud flower vase and a miniature nuclear cooling tower. When done brushing, you simply drop the brush head down through the top of the base, which activates a ring of UV-C lights inside, bathing the brush head in germ-killing power for five minutes. A heat-based drying system sucks out lingering moisture, further stalling bacterial growth. (Full disclosure: I didn’t do any petri dish lab testing to measure how much bacteria had truly been slain.)

The brush component is a standard ultrasonic variety (the company says it vibrates at 40,000 strokes per minute), with two power settings available. The design of the brush is equally forward-thinking, though with its odd taper at the bottom and top-heaviness, it can feel rather unbalanced while brushing. During standard use, I found the brush effective at cleaning, though the odd design made it a bit more awkward than I’d like when reaching back to the farthest recesses of my mouth. As is common with electronic toothbrushes, a brief pause every 30 seconds nudges you to move to another area—and the brush cuts off automatically after two minutes.

Also of note: The system is available in four colors, including a striking rose gold option, each with the base matched to the brush.

After several days of use, I adapted to the brush’s odd balance, and I came to like the Tao system fairly well when brushing my teeth. From an effectiveness standpoint, it feels on par with my Sonicare.

I do, however, have two complaints. First, it’s clearly built for one person and one person only. While you can replace the brush head easily, the head has to be attached to the brush in order to use the cleaning system, which means if you want to share it with a partner you’ll need to brush your teeth on much different schedules if you both want clean brush heads. This isn’t feasible for most, which means couples will have to invest in two systems, which will consume a huge amount of counter space. (The Tao Clean is not the most compact of systems.)

My second and more troublesome concern involves the overuse of lighting effects on the device. While the UV system only runs for five minutes, the Tao Clean device is covered with additional lights which never actually shut off. There’s a light on the end of the brush and a quarter-sized light on the front of the base station, and these are on 24/7. It’s not just a waste of power, it’s a huge nuisance if your bathroom is connected to your bedroom, putting out so much light that I could easily read by it in the dark. I ultimately had to drape a towel over the Tao after hours, but that’s probably not the aesthetic the company is after.

Sat Sep 26 , 2020
Labor Day weekend can be bittersweet, but Wayfair is here with a holiday sale to end summer on a high note. The site, which is known for trendy-yet-affordable furniture and home goods, has select furniture, décor and outdoor living items marked up to 70% off right now. Shop outdoor furniture, […] 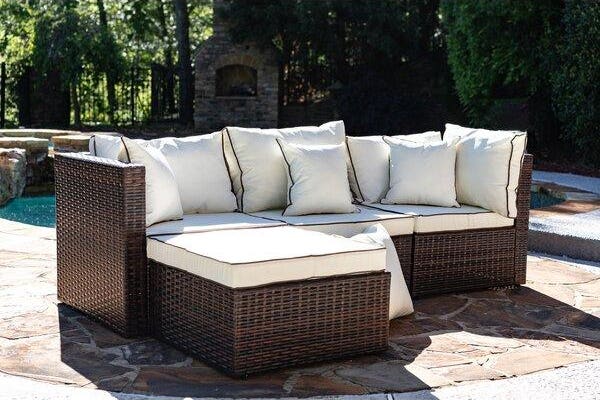