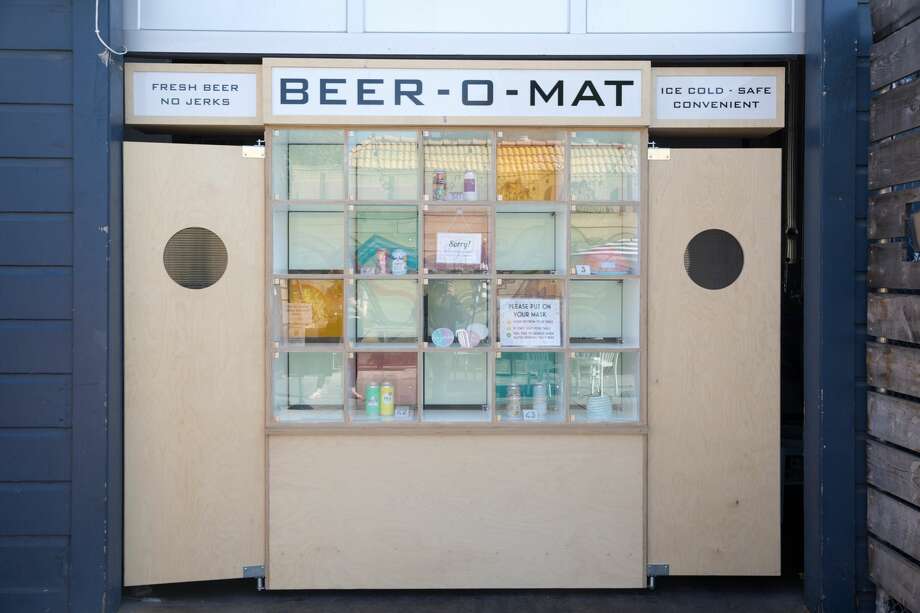 Temescal Brewing is using a contactless ordering system called the Beer-O-Mat for customers at the outdoor beer garden in Oakland’s Temescal neighborhood.

Temescal Brewing is using a contactless ordering system called the…

On languid summer days, Temescal Brewing’s beer garden typically sees its wooden picnic tables crammed with tipsy friends gulping from foam-topped glasses. With taco trucks out front, pastel decor and beers with names like “Lawn Flamingo” and “Breezy Days,” the Oakland brewery on Telegraph Avenue is the epitome of a carefree day in July.

But for the past four months, its picnic benches have remained empty — until now. As of last weekend, the sun-drenched patio is open, just with a few changes: namely, a pastel pink and green contraption labelled “BEER-O-MAT” in huge block letters that has taken on beer-serving duties.

“Rather than setting up a table where people could just come and grab a beer, we wanted to … add a little bit of whimsy to what is a very different experience for people,” said Sam Gilbert, co-founder of Temescal Brewing, which opened in 2016. 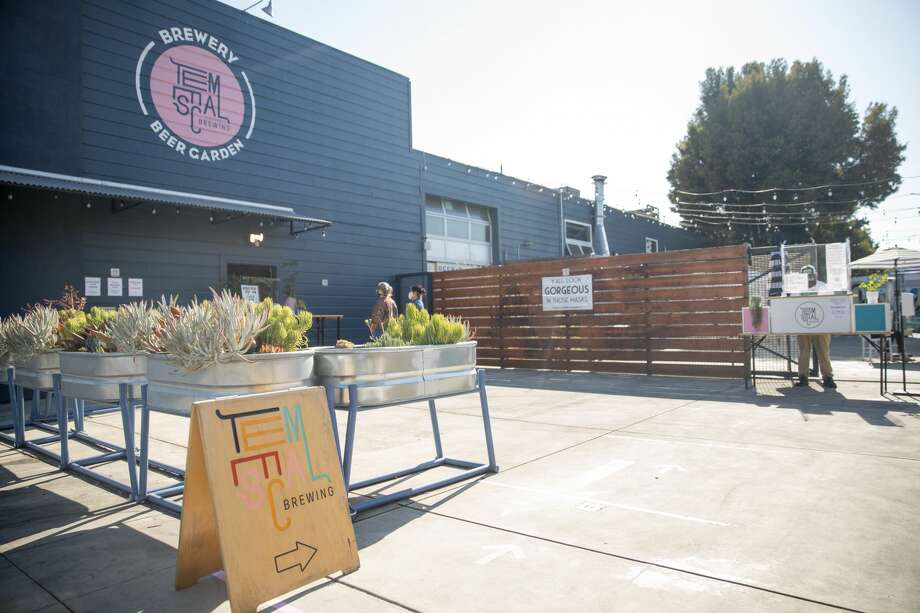 The exterior of the Temescal Brewing beer garden in Oakland, Calif. on July 27, 2020.

The exterior of the Temescal Brewing beer garden in Oakland, Calif….

This new addition fits in well with the lighthearted, approachable vibe of the brewery, from the pastel colors and simple shapes that decorate their beer cans to the neon sign inside that demands “no jerks” above banana and cactus decals.

The Beer-O-Mat, however, is less high-tech than it sounds. It’s more of a “crazy little art piece” inspired by 1950s automats than an actual beer-wielding robot, according to Gilbert. It’s professional-looking enough to fool you at first glance, with four rows of plexiglass-shielded cubbies backed by sliding walls of pale pink and green. But upon closer inspection, you’ll realize there’s nothing automated about it.

RELATED: Bay Area bars are still closed. But this brewery found a way to reopen. 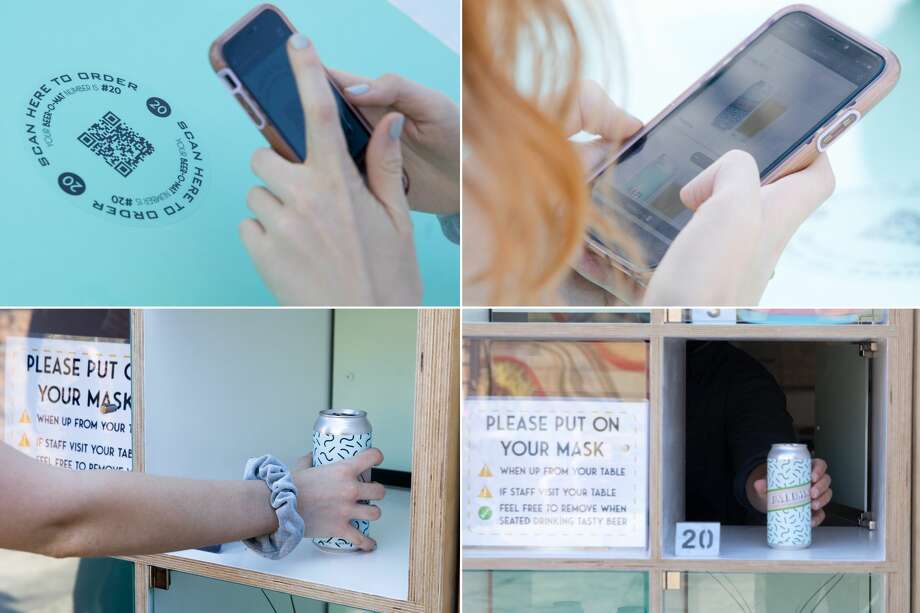 (Clockwise from top left) Using a cellphone, a customer scans a QR code, picks their beer choice, then picks up the delivery in Temescal Brewing’s Beer-O-Mat.

(Clockwise from top left) Using a cellphone, a customer scans a QR…

To order a beer, you scan a QR code with your phone at the brewery’s entrance (where a host will assign you a table), enter your name and payment information, then select your beer of choice. Once it’s ready, you receive a perky text: “Hey Pal! Your order is ready for pickup at our Beer-O-Mat.” You walk up to the contraption, and in a compartment labelled with your table’s number, a hand from behind the wall magically pops out to place your beer inside (canned beer only, at least for now).

Oh, and you’ll be required to purchase a meal ticket, too — Temescal Brewing has partnered with rotisserie food truck Roli Roti, and as per Alcoholic Beverage Control guidelines, you’ll need some food with that beer. Good thing drinking makes you hungry.

Of course, it’s amusing to order a craft beer from a faux-vending machine, but more important is the purpose it serves: to keep employees and customers safe, especially as COVID-19 cases continue to rise. The Beer-O-Mat is totally contactless, avoiding the situation at other restaurants where servers end up exposed to maskless customers when they have to take orders or bring food to tables. 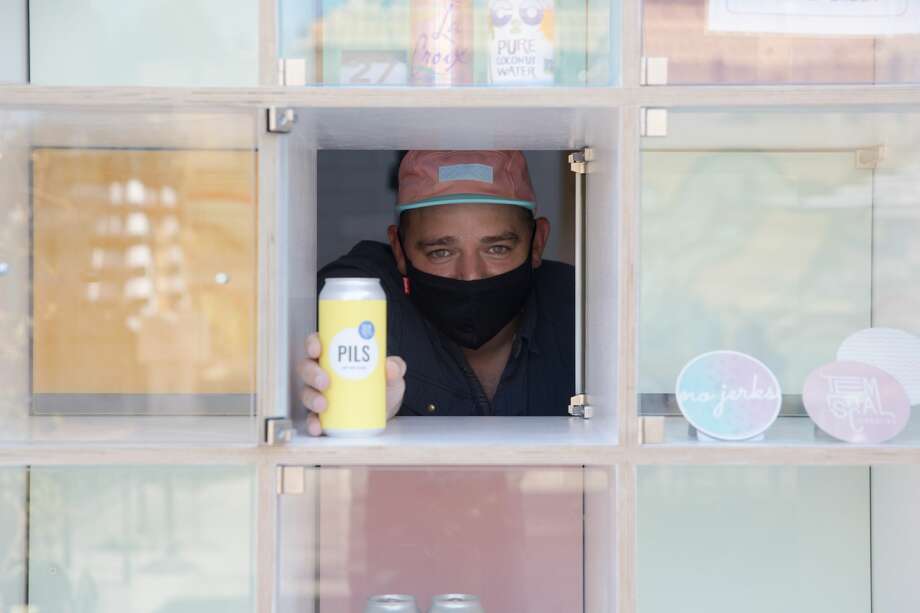 Co-owner Sam Gilbert places an order in a window of the Beer-O-Mat at Temescal Brewing in Oakland, Calif. on July 27, 2020.

“We, as well as a lot of people in the industry and people who go to restaurants, have been really ambivalent about dining out right now,” said Gilbert. “Is that what we should be doing? Is this safe for our staff? With a lot of those questions in the air, we decided pretty early on that we wanted to be very uncompromising about it. … We wanted to see if there was a way we could set up our patios where our servers wouldn’t need to be visiting tables but nonetheless be able to make it work.”

Over the past few months, Temescal Brewing’s pick-up system for canned beers has been similarly careful, with customers placing orders online ahead of time and employees at the outdoor pick-up kiosk separated by plexiglass. Since its manufacturing output was already strong pre-pandemic, the brewery was managing to get by with just to-go sales — but a PPP loan early on helped.

“When we received PPP loan funds, we used those to rehire all our staff, and since then we have been able to maintain all staffers through this,” explained Gilbert. However, he was hesitant to fully sing the praises of PPP loans, as they haven’t helped many of his friends in the industry who are “really hurting right now.” 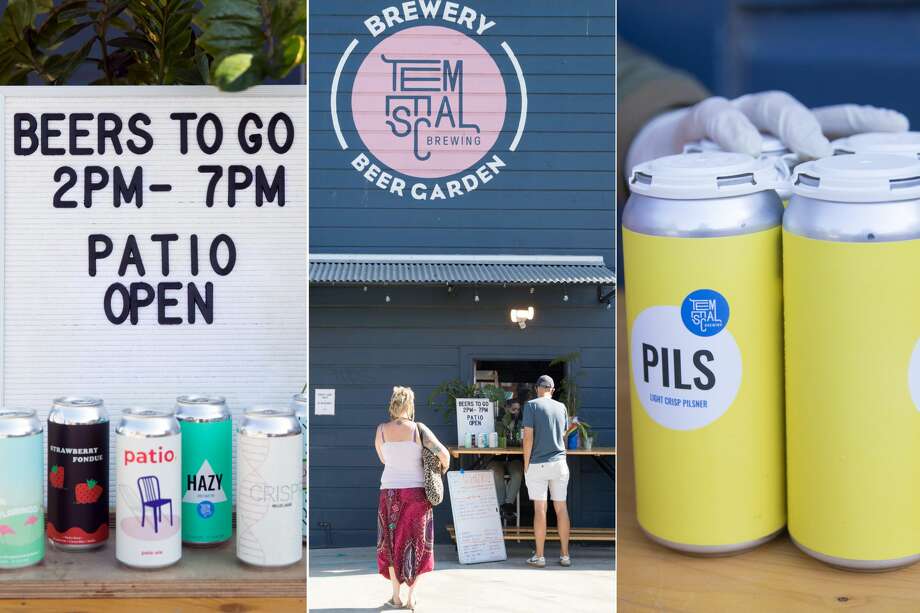 (Left to right) A selection of beers available, customers ordering…

Finally being able to reopen the patio on weekends is already starting to help business at Temescal Brewing — as an outdoor beer garden specializing in low-ABV porch-drinking beers, their summer patio service is their bread and butter (“summer is the time when we make the money to prepare for winter,” explained Gilbert).

But they didn’t get to reopen when they had originally planned. Initially, they were slotted to reopen on July 11, but what happened next caught them totally off guard: About 10 p.m. the Friday before, Alameda County abruptly shut down all outdoor dining. 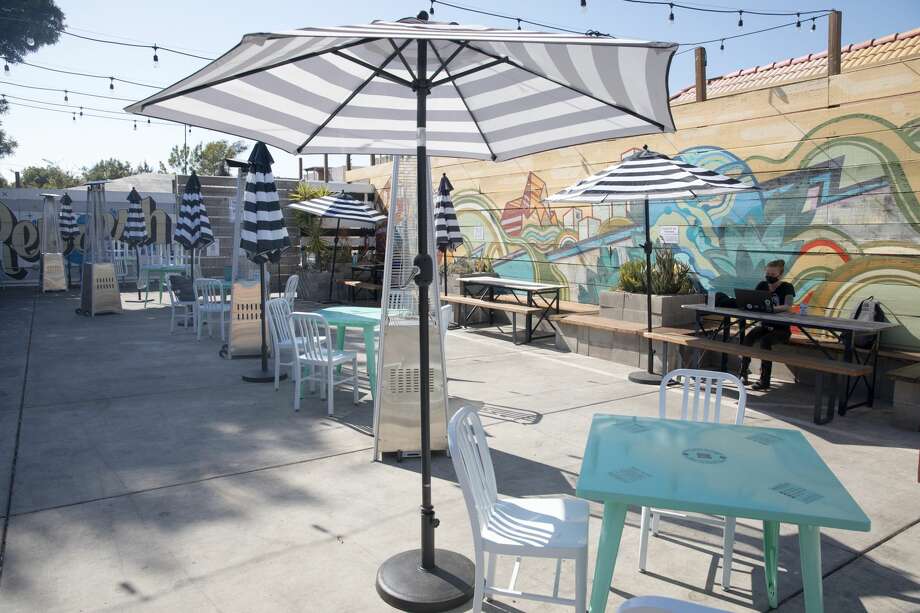 The outdoor beer garden at Temescal Brewing has placed tables that are socially distanced in Oakland, Calif. on July 27, 2020.

The outdoor beer garden at Temescal Brewing has placed tables that…

“There was a lot of work that went into doing this. … Me and the team were pretty devastated,” recalled Gilbert. “But honestly, it did give us another week to tweak some things.”

By the following Wednesday, the county allowed outdoor dining to resume. Now, Temescal Brewing’s patio is open every week on Thursday and Friday from 4 to 8:30 p.m. and Saturday and Sunday from 3 to 9 p.m. Gilbert is just happy to see people enjoying themselves in his beer garden again — even if they’re grabbing cans from a Beer-O-Mat instead of gabbing with the bartender.

“Sitting at a table drinking a beer with other people you don’t know somewhat in the vicinity who are doing the same thing, and making a little bit of noise…” Gilbert said, trailing off. “We all missed it so much, and it’s back.”