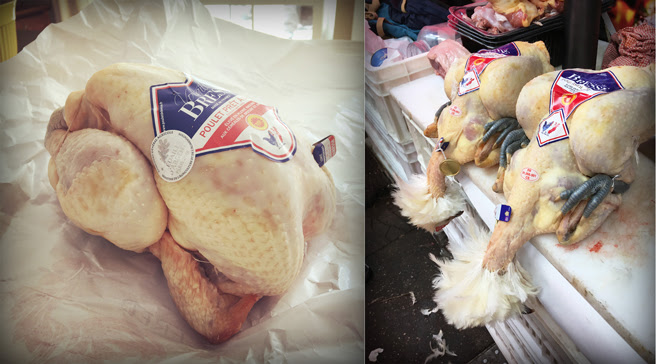 Poultry in France is a subject with seemingly endless variety. On any given day, strolling through the market stalls, we see a typical volailler presenting birds of all sizes and flavors: from quail, pigeon, guinea hen, simple farm hens, chickens of various grades and breeds, duck, and yes, rabbit. You might not associate rabbit with poultry, unless you envision where it is traditionally found, in the basse-cour, which is the place where the small farm animals are traditionally tended to. Turn the pages of an old French cookbook where the true gems of French regional cuisine reside, and it’s likely you’ll see the poultry recipes grouped in such a way, with rabbit following along in its proper place.

Chicken is a passionate subject for many French home cooks, and it’s common knowledge that there is a direct connection between not only the breed of chicken but also where a bird has been, how it’s fed, living conditions for the animal and its ultimate flavor. For this reason, there is no question in any cook’s mind about the superior qualities of a Poulet de Bresse, which is considered to be the very best of the best in poultry. Thankfully, due to Lyon’s close proximity to Bresse country and local traditions here, we can find the Poulet de Bresse at the market on a regular basis at a reasonable price, as well as the cream and butter typical to the Bresse region on local shelves.

The Poulet de Bresse is not only a specific breed of poultry, but also bred in compliance with product specifications defined in the European AOP dossier. It is raised free-range with 10 square meters of open pasture per chicken to run in. The chickens are grown to ages 40% higher than the very much respected label-rouge chickens, a crucial few weeks that guarantees richer flavor and tonicity to the meat. They are fed with traditional locally-grown grains certified to be free of all GMO products, and a whopping thirty percent of their diet comes from their natural foraging activities, located within a specified geographical boundary that overlaps small parts of the Rhone Alpes, Burgundy, and Franche-Comté regions in France. Every aspect of the poultry’s living condition falls within guidelines defined by the dossier that controls their Appelation d’Origine Protégé (Protected Name of Origin, i.e. “Bresse”). These chickens are even fed the local milk. Based on the age-old principle that terroir and tradition both play a crucial role in the product, the quality of this poultry is undeniable. You can definitely taste the difference.

You can recognize a Poulet de Bresse by its characteristic blue feet, white feathers and red crest. Each chicken will have a band around its foot indicating the farm it came from, as well as the labeling that distinctly signals the poultry’s protected origins, yielding the “Bresse” name, and AOP label.

When I see plump Bresse hens at my volailler, it instantly becomes one option for our Market Table meal at Plum Lyon. What can be better than a locally raised poulet or poularde, flavors that for many are a first-time catharsis into what poultry was meant to taste like? One very nice way to prepare it is to carve up the bird, the carcass meant for stock or even consommé, and to fix a nice rustic fricassée with mushrooms which will bring out the very best qualities of this majestic poultry.

1 Poulet de Bresse, carved into eight pieces: Each breast with wing (suprème) removed from the ribcage and sliced in two, diagonally, leaving each wing with a considerable chunk of breast meat attached, the remaining breast pieces which have retained integrity in shape, and the drumsticks and thighs separated at the joint.
salt
pepper
flour
60 grams or 6 tablespoons butter
30 grams neutral flavored oil like grapeseed, or duck fat, should you have some on hand.
125 ml or about 1/2 cup of dry white wine, or Vin Jaune if you’ve got it.
1 onion
1 stalk celery
1 carrot
400 g or two cups crème fraîche (when in Lyon seek out Crème Bressane) or heavy cream
lemon, to season
12 morels , dried or fresh, or a half pound of mixed cultivated and wild mushrooms, brushed clean and sliced
125ml or 1/2 cup white wine, optional (when using morels)

Chop the carrot, onion, and celery into small dice. Melt 20 grams of butter in a large cooking pot suited to oven roasting the whole chicken, and sweat these aromatics (the mirepoix) over low heat with a pinch of salt for about 5 minutes, until they’ve softened and released their flavors.

In the meantime, season the chicken pieces with salt, pepper, and flour on all sides. In a separate frying pan, brown the chicken pieces over medium-high heat in a 50/50 mixture of butter and neutral oil like grapeseed. As the pieces brown, place them (white meat at first on the bottom of the pan, followed by the legs and thighs on top) into the cooking pot with the mirepoix. Once the meat is in the pot, turn up the heat for a minute or two to get it nice and hot. Pour the wine into the pot, and cover it immediately to contain the steam.

Transfer to the hot oven, and set a timer for 25 to 30 minutes. At the end of this time, transfer the chicken pieces to a roasting pan to keep warm, covered with foil, in the oven which has been turned off.

Prepare the sauce: Strain the cooking juices, skim off the considerable fat that floats to the top, and transfer it into a sauce pan. Turn up the heat, and reduce this liquid by one-half. Add the cream, bring to a boil, and reduce by one-half again, creating a rich, thick, creamy sauce. (note: low-fat cream will not work for this step, you need at least 30% fat, otherwise the sauce will curdle and separate.)

Cook the morels in the remaining 10 grams of butter briefly, then add the white wine wine and carefully simmer about 10 minutes until the wine is completely reduced.

Note: When preparing this dish with mushrooms other than morels, they don’t need to cook in the wine. You can simply sauté them in a little bit of butter and a pinch of salt until semi-wilted and continue with the recipe.

Add the mushrooms to the cream sauce and toss to combine.

We like to serve this dish on a big platter. In springtime, this can be served over simply steamed new potatoes. During other seasons, rice or noodles are also a choice. Slice the steamed potatoes in half and pile them (or rice or noodles) in the middle of the platter. Place the hot chicken over the potatoes, followed by the mushrooms in sauce. Any remaining sauce can be offered at the table. Serve immediately.

A note on mushrooms for this dish: Morels are the ultimate choice for the mushroom in this recipe. The season for these little beauties falls typically in early spring, when we’ll see piles of them, freshly foraged, moist, and clean offered by the farmers who gathered them. This year we had them locally for less than two weeks, which makes a short season. Don’t worry, the morel is a mushroom that dries very well, and the poultry vendors on the market will offer them dried for sale, specifically for this dish. Don’t be put off by the hefty price tag on the dried mushrooms, as you’re buying them by weight dried so you needn’t buy more than a dozen for one chicken – 50 to 100 grams might be enough – once reconstituted, they will render an amazing flavor.

With morels out of season, there’s always the possibility that you can gather up either alternative wild mushrooms in season when you can find an abundance of amanite de cesar, coulemelles, girolles, les trompettes de mort and les chanterelles grises, OR pick a selection from producer’s cultivated offerings of pleurotte, aka golden trumpet or oyster mushrooms for texture, combined with (why not?) the plentiful cultivated flavorful fresh shitakes which can definitely compliment a rich creamy wine-enriched Bresse poultry sauce. Tight and small champignons de Paris and brown button mushrooms will be your plan B. You can round out anything you’ve gathered with them from one end of the market to the other.

Fri Apr 3 , 2020
The EagleVail Community Garden would like to thank the EagleVail Metro District for their generous support in allowing us to use the garden site. 2020 Garden Plots! Corporate Gardeners – please use this online application. All other gardeners – please use this online application. It’s not too late to apply or renew! […]