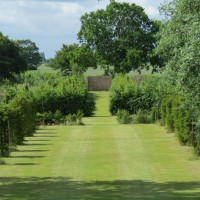 We have continued with some major Construction projects this year, but I’ve been holding off creating an article until they were more “complete” – trouble is, the article is going to be very long once completed; maybe I should just publish the “work done so far”

We continue creation of the Japanese Stroll Garden. I had hoped that hard landscaping would have been finished last Autumn, but although we got close it was not close enough, so sadly a year’s delay in the planting, and of course the plants getting getting to a respectable size.

This year we have lined the paths with granite blocks, and contoured the banks, so I am planning to plant the Trees and Shrubs that need a while to grow during this winter. 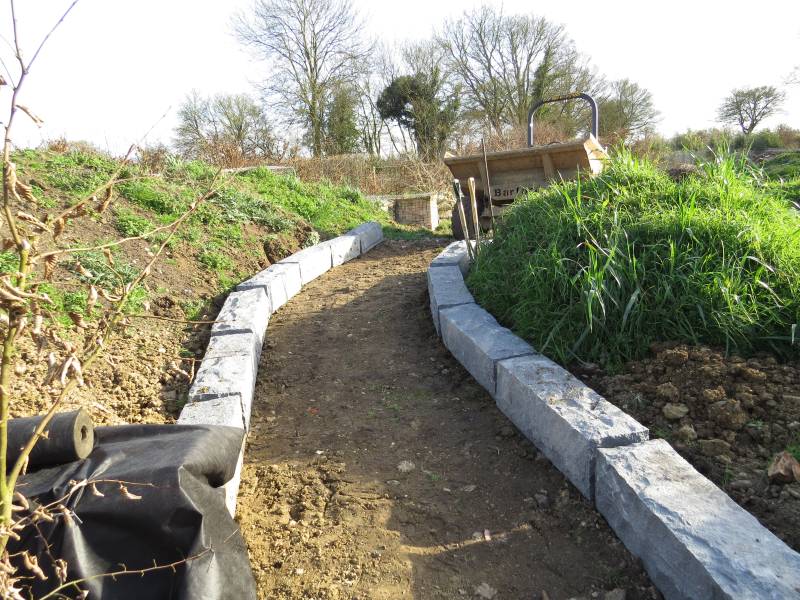 and dug a pond.

In Autumn 2016 we planted about 60% of the Cross Court with 1,500 Spring-flowering Crocus Ruby Giant (which is neither Ruby nor Giant of course!) and 1,000 small Tete-a-Tete Daffodils. actually I don’t think we can have done 60% as I have planted 1,000 of each already this Autumn and have ordered another 500 and 250 more respectively … either way, its “quite a lot” ! 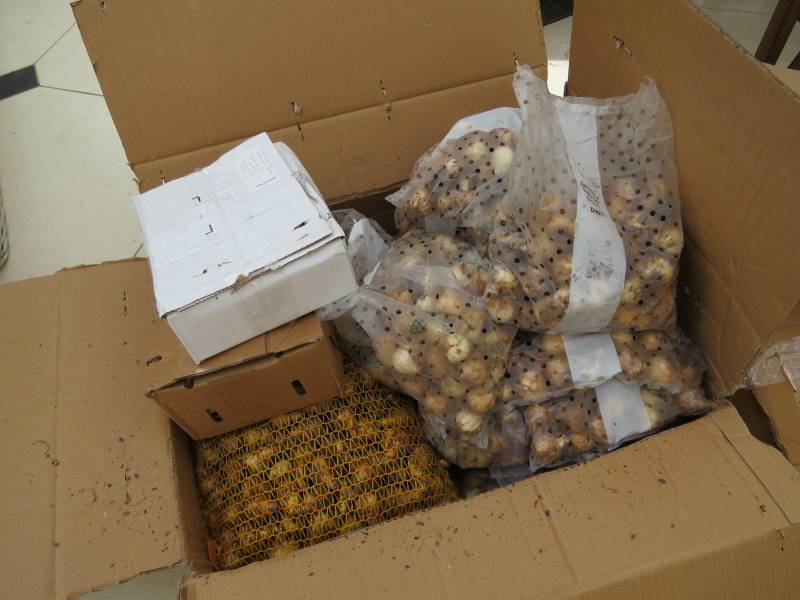 I’ve also started planting Daffodils in the lawn. This started with the planting of 25 of each of 28 varieties, in the Fruit and Nut garden, as a trial, and for cutting, in Autumn 2015, and I made notes of times of flowering in Spring 2016 and 2017, along with colours and vigour, and we have decided to naturalise four varieties which spread the flowering season.

We have started thinking about! a Winter garden – some trees with spectacular Autumn colours (soil is alkaline here, so its never going to be as showy as the trees that favour Acid soil can achieve) and then planted with Winter interest. The photograph shows the view from the house, and some vista-paths I cut through the rough grass to check that the perspective etc. looked about right,l and we’ve now started spreading compost and planting some Autumn-colour trees, which we will under-plant with Dogwood and Willow chosen for the winter-colour of their stems. 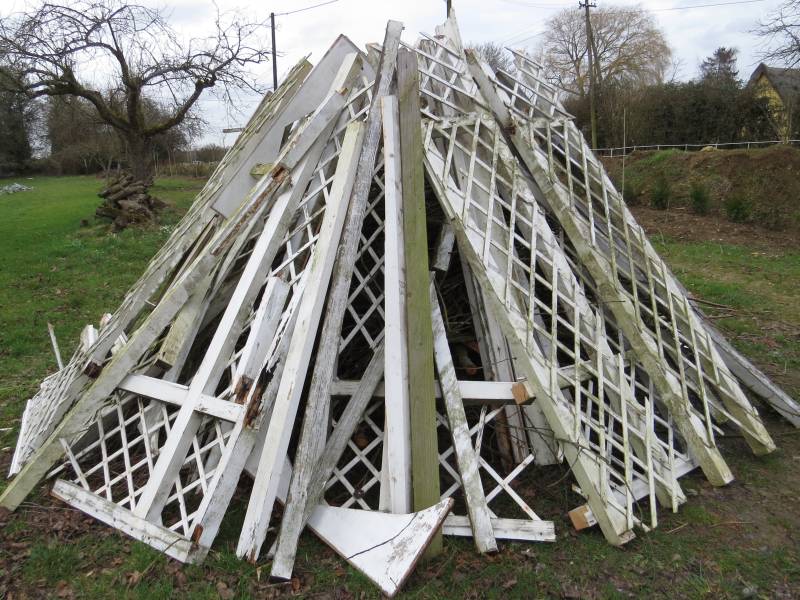 We have taken the Pergola down – the eyesore it was hiding has been replaced with something more attractive, so we’ve just extended the Rose Garden where the Pergola used to be (and changed all the soil, of course, which involved a JCB so not entirely “simple”!)

and on the other side of our “back terrace”, where we sit up in Summer, we’ve ripped out some uninspiring shrubs and are planting for an eventual row of Cloud Pruned topiary. 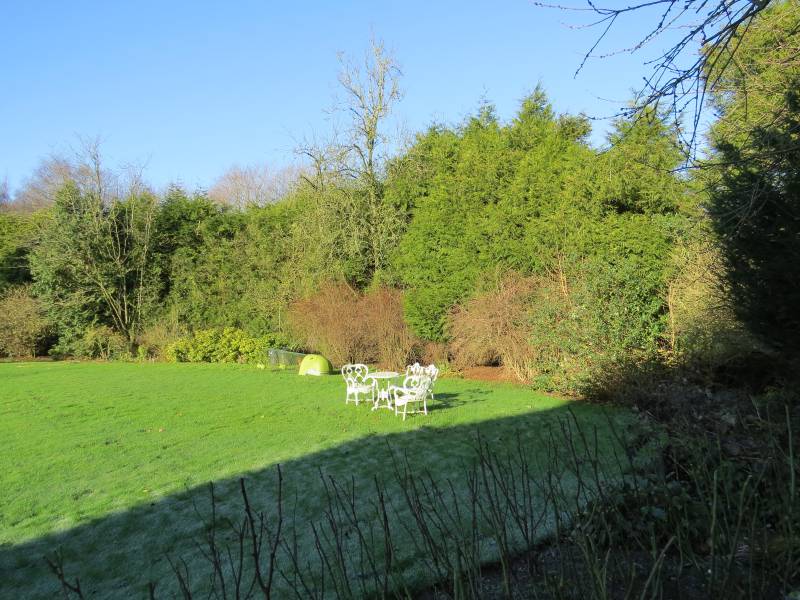 Still unsure about the choice of plants for the Round White garden I grew some annuals from seed (Nicotiana Alata & Sylvestris, and white Cleome, along with White Gladioli and Dahlias) and planted them around the perimeter. Turned out that we really liked that look, but that meant that the bed was up to head-height in only a couple of metres from the perimeter, so what to do in the middle? Our original thought of a Sissinghurst wrought-iron frame, and a climbing rose (e.g. Rosa mulliganii) would never be tall enough to view above the perimeter planting. So we are now thinking of creating a path to the centre of the circle and a separate “inner garden”.

Lastly I’ve planted some Box to separate the house from the lawn, and the garden beyond. We have stone balustrade on the other side of the house, between the terrace and the lawn, but the previous occupants paid for that! so I figure that I can topiary the Box INTO a balustrade. The Box are all from cuttings, so don’t owe me anything. 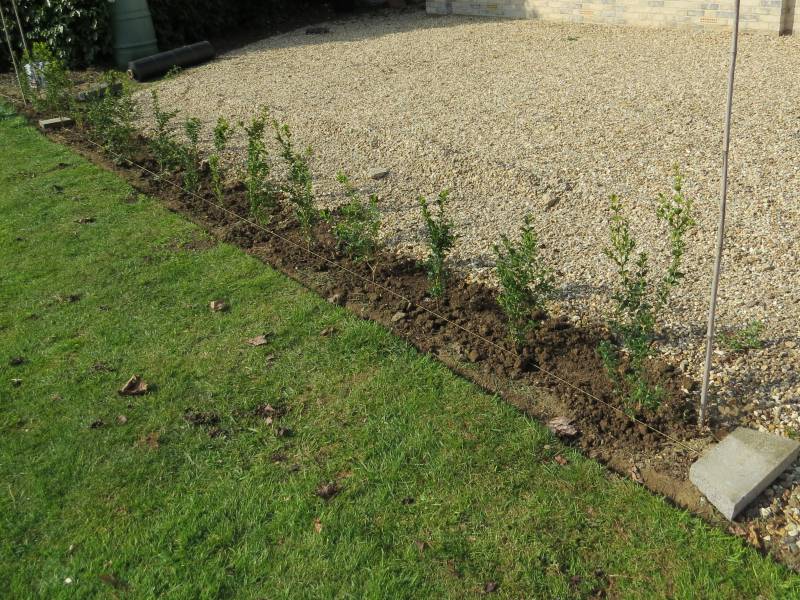 Thank you for viewing the tour. If you would like to receive notifications when I add an update to my blog, which is rarely more than once a month, please use the “Follow” button in the menu on right hand pane.