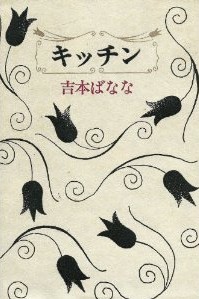 Kitchen （キッチン）is a novel written by Japanese author Banana Yoshimoto (吉本ばなな）in 1988 and translated into English in 1993 by Megan Backus.

Although one may notice a certain Western influence in Yoshimoto’s style, Kitchen is still critically recognized as an example of contemporary Japanese literature; The Independent, The Times, and The New Yorker have all reviewed the novel favorably.

Most editions also include a novella entitled Moonlight Shadow, which is also a tragedy dealing with loss and love.

There have been two films made of the story, a Japanese TV movie in 1989 and a more widely released version produced in Hong Kong by Yim Ho in 1997.

From Mikage’s love of kitchens to her job as a culinary teacher’s assistant to the multiple scenes in which food is merely present, Kitchen is a short window into the life of a young Japanese woman and her discoveries about food and love amongst a background of tragedy.

In Kitchen, a young Japanese woman named Mikage Sakurai struggles to overcome the death of her grandmother. She gradually grows close to one of her grandmother’s friends, Yuichi, from a flower shop and ends up staying with him and his transgender mother, Eriko. During her stay, she develops affection for Yuichi and Eriko, almost becoming part of their family. However, she moves out after six months as she finds a new job as a culinary teacher’s assistant. When she finds that Eriko has died, she tries to support Yuichi through the difficult time, and realises that Yuichi is probably in love with her. Reluctant to face her own feelings for him, she goes away to Izu for a work assignment. However, after going to a restaurant to eat katsudon, she realises she wants to bring it to Yuichi.

In Moonlight Shadow, a woman named Satsuki loses her boyfriend Hitoshi in an accident and tells us: “The night he died my soul went away to some other place and I couldn’t bring it back”. She becomes friendly with his brother Hiiragi, whose girlfriend died in the same crash. On one insomniac night out walking she meets a strange woman called Urara who has also lost someone. Urara introduces her to the mystical experience of The Weaver Festival Phenomenon, which she hopes will cauterize their collective grief.