In the weeks since all of Italy was ordered indoors — no soccer games, no visiting cafes or bars, no church services — the country made slow progress toward containing its severe coronavirus outbreak.

There are signs of hope: Even as the number of cases climbs, the rate of infection has started to slow under the nationwide lockdown. But Italy continues to answer for mistakes made before it took effect.

More than 124,000 people in Italy have tested positive for Covid-19, the disease caused by the new coronavirus, since its outbreak began. The country, which has recorded more than 15,000 deaths, now has the highest coronavirus death toll in the world — and it is still rising.

Some scientists say that Italian officials did not act decisively to stop the virus early on, underestimating its danger and how quickly it spreads. “We realized the virus was here too late,” said Roberto Burioni, one of Italy’s leading virologists. “It was already spreading.”

Any decision to let up now and ease restrictions on movement, public health officials warned, would risk a new wave of infections. “We haven’t reached the peak, and we haven’t passed it,” Silvio Brusaferro, the head of Italy’s national health institute, said at a recent news conference.

… but it is taking longer for the number of new deaths to fall.

Recognizing the continuing severity of the crisis, Italy extended its lockdown to at least mid-April, with most government and public health officials recommending that the measures remain in place even longer.

“If we started to loosen the measures, all our efforts made so far would have been in vain,” Prime Minister Giuseppe Conte said at a news conference on Wednesday. “We would pay a very high price. We ask everyone to continue to respect the measures.”

Read more: In Italy, Going Back to Work May Depend on Having the Right Antibodies

That message may be tough to hear for the 60 million who have spent the past month confined to their homes and whose patience is wearing thin. But public health experts stress that safely releasing Italy from lockdown will require not only more certainty that the spread of infection has slowed considerably, but also assurances that the country can prevent another immediate outbreak.

“There needs to be a robust test, trace and quarantine system in place before you begin to unlock these measures,” said Thomas Hale, a professor of public policy at Oxford University who has been tracking government responses to the coronavirus around the world. “In Japan, we saw a country that thought it had it under control, but might have to go into severe lockdown now.”

Luckily, Italy has some evidence that “flattening the curve” of new infections is possible within its own borders. Provinces in the north such as Lodi and Padua that reacted to the outbreak more quickly than their neighbors are already seeing a sustained decline in new infections. They offer clues for how the country as a whole may be able to emerge from its lockdown.

Locked Down and Waiting

By March 8, the government had ordered most regions in Italy’s north to close schools and ban sporting events and large gatherings. A curfew shuttered bars at 6 p.m.

The nationwide lockdown that went into effect on March 10 went further, banning all nonessential movement and requiring permission to travel for work, health or “other necessities,” like groceries. Police checkpoints were set up around the country, and those who were stopped had to fill out official forms explaining their movements.

These extreme measures appear to have worked: People stopped moving around.

The lockdowns reduced how far people traveled compared with travel before the outbreak. 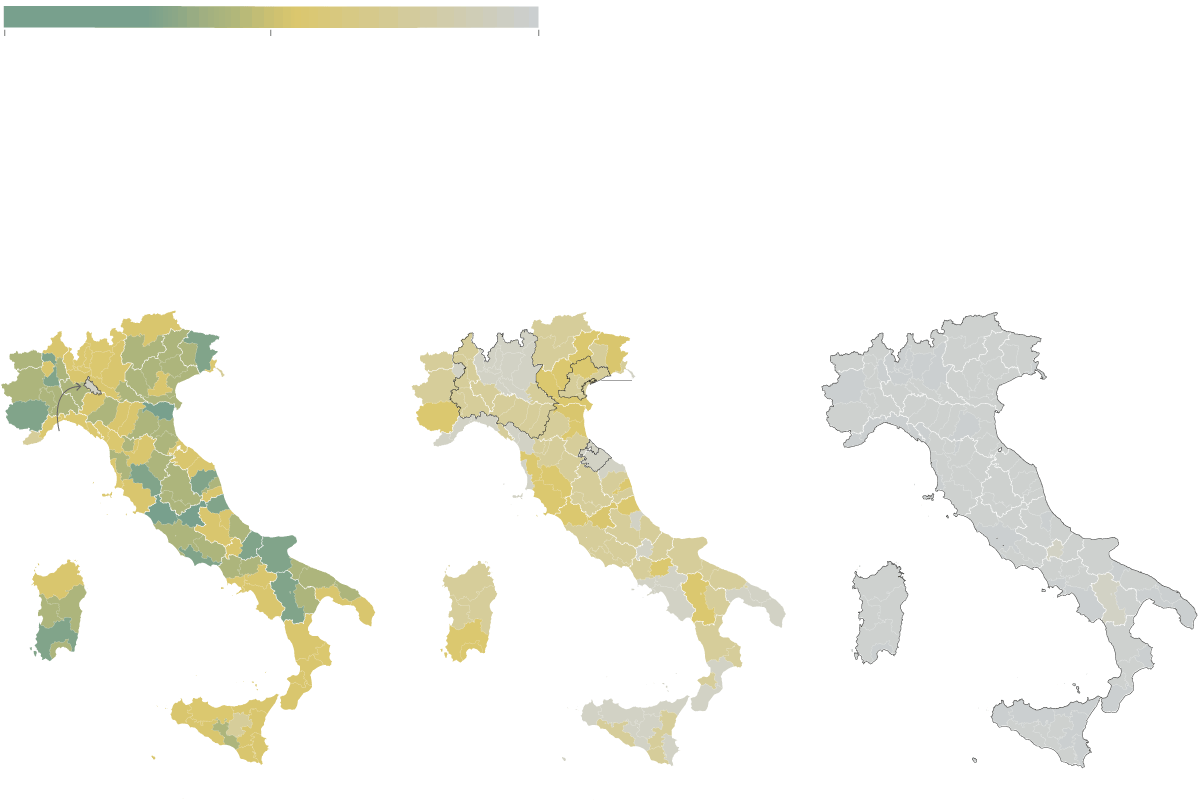 Note: To calculate reductions in travel, researchers drew a circle around all the points individuals visited in each period. Reductions in each province reflect the change in the median per-person distance traveled.·Source: Data compiled for The New York Times based on a paper by Pepe et al.

Researchers who studied anonymized smartphone data found that Italians stayed much closer to home after the lockdowns were imposed. In the week following the national lockdown, they traveled 20 percent as far as they used to, on average. (The median person traveled even less: just a tenth of their usual distance.)

But by then, the virus had already had ample time to spread. And nearly a month into the national lockdown, Italy is still adding an average of 4,000 new cases per day.

Scientists say that trajectory is expected. Because the virus has an incubation period of up to two weeks, new cases reflect infections that may have occurred days or weeks earlier. That means even the strictest lockdowns will not yield immediate results.

“This is the frustrating thing,” Dr. Burioni said. “You have to wait 15 days to see whether there is an effect. In the meantime, you have to just hold your breath.”

Lombardy, the northern region where the outbreak was first detected, has been hit hardest: The region accounts for about 40 percent of the country’s confirmed cases and more than 50 percent of its deaths. But Lombardy may also be the first area of Italy to see the lockdown’s positive effects.

Local lockdowns seem to have made a difference in slowing the spread of the virus, even within Lombardy. Provinces that moved to limit mobility earlier were able to reduce the rate of infection sooner.

The growth in new coronavirus cases varied among Lombardy’s provinces.

Lodi, the province just south of Milan that saw the initial cluster of cases, moved to lock down several towns as early as Feb. 24. The neighboring provinces of Bergamo and Milan did not restrict movement until the national government imposed a lockdown on most of the north two weeks later.

Lodi managed to flatten its curve, while some of the other provinces in Lombardy were still seeing an increasing number of new cases per day until the end of March. Giovanni Sebastiani, a mathematician at the Italian National Research Council, said Lodi’s experience showed “we would have probably reduced the spread of the epidemic if the lockdowns happened earlier elsewhere.”

Countries around the world will be watching Italy to see whether it eases restrictions later this month and what happens if and when it does.

Mr. Brusaferro, the head of the country’s health agency, told reporters that Italy was in the unenviable position of being first in the West: first to see a severe outbreak, first to lock down its citizens and first to decide what comes next.

“We must avoid any measure that causes the curve to climb again,” he said Tuesday at a news conference. “There are no studies or literature on this. We are looking into scenarios that have never been taken before by countries that resemble Italy. Other nations are looking at us as a pilot program.”

There is no ideal time frame for a lockdown, public health experts say. The growing international consensus holds that once an area sees a sustained decline in case growth — ideally close to zero new cases per day — it can start to lighten restrictions. Italy might start by reopening schools or businesses in certain regions, or by easing up on social distancing rules.

The other major consideration is how well Italy can continue to test people for the virus and trace their contacts to prevent a second outbreak.

In South Korea, widespread testing allowed health officials to detect infections early and quarantine the sick, even among people who were not showing any symptoms. Public health officials then tracked down anyone an infected person may have had contact with, slowly eliminating further spread of the virus.

In Italy, the Veneto region, an area of about five million people in the north, is already far ahead on testing. The regional government there plans to reach 20,000 tests per day this month.

Veneto leads Italy in the number of tests per 100,000 people. 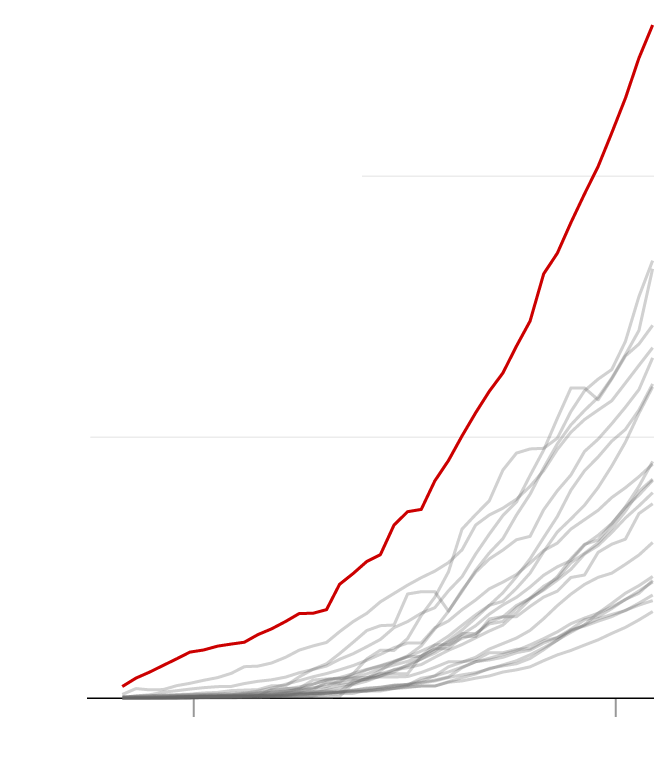 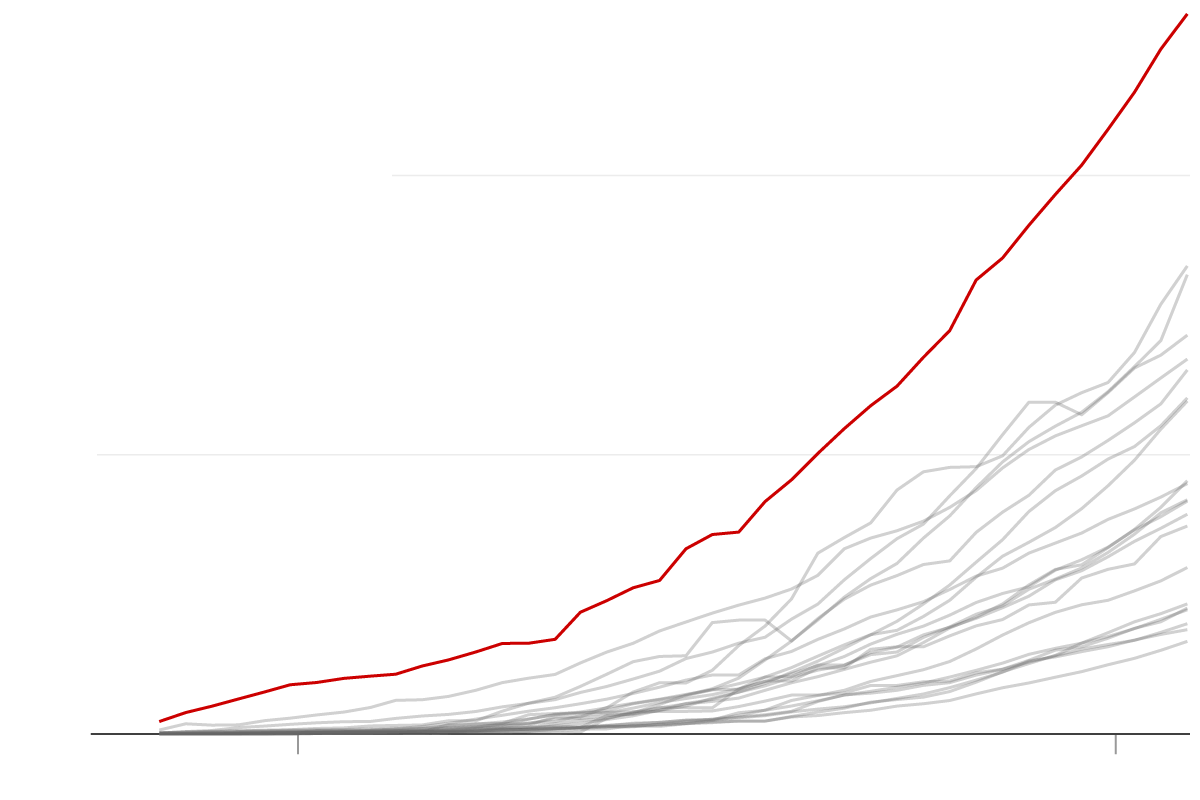 Yet scaling up testing is difficult, given the limited availability of tests and the capacity of labs to take samples. And the harder part comes next: tracing the contacts of those who have tested positive for the virus and urging those in contact with an infected person to self-isolate and get tested.

Rosalind Eggo, an infectious disease modeller at the London School of Hygiene and Tropical Medicine, estimates that for every person infected, public health officials would have to rush to trace anywhere between 20 and 100 contacts each, depending on an individual’s activity before testing positive. There are efforts underway to pursue more large-scale, digital contact tracing, but they are still being developed.

For now, keeping the lockdown in place — even for longer than is strictly necessary — is the safest way for Italy to ensure that the virus does not keep spreading.

“If we ease up, is it better that we ease up on schools, workplaces or on social interactions?” Dr. Eggo asked. “Which of these interventions are the ones we can relax? That’s a really big question we’re trying to answer. We’ve never been in this situation. It is unprecedented.”

Sun Apr 19 , 2020
The biggest flower & garden show in Idaho is the perfect kick off to Spring with everything you need to make your yard and garden beautiful! Join us at the 25th Annual Boise Flower & Garden Show, March 19-21, 2021 at the Boise Centre! After 24 years, we continue to bring […]