1. Turn your room into a French palace window or balcony opening

Castles and palaces shows off the elegant and distinctive look and feel of French decor.
Their architecture is grand and their interior design aesthetics has a unique elegance.
The effect is looking through a balcony or window opening onto the palace grounds.
Here’s an example of a tapestry to create this effect: 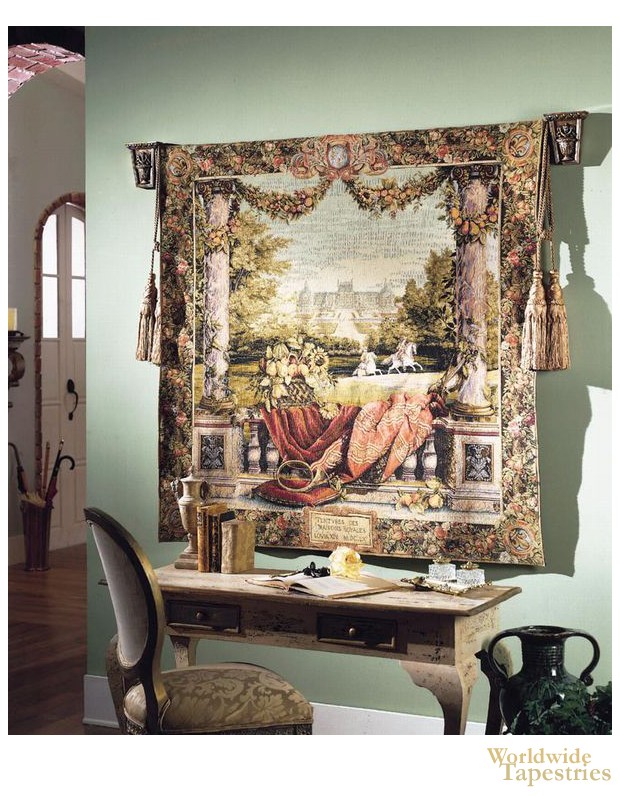 The balcony shows a red drape and flower and musical instruments so typical of the decor art of the 17th century in France.
The French had an obsession with art, which came from a culture all the way from the top, the King of France.
The kings of France had an interest in art and direct control of using their choice artists to progress art aesthetics of the country.
Almost like national pride, French art and textile production was a way in which the French nobiltity exerted their love of art purely for their love of it, as well as boosting national reputation.
Now, where does the name Gobelins come from?
The Gobelins name comes from the famous Gobelins Manufacture, located on 42 Avenue des Gobelins, in Paris.
Its full name is “Gobelins Manufacture de Paris” from the 15th century onwards. 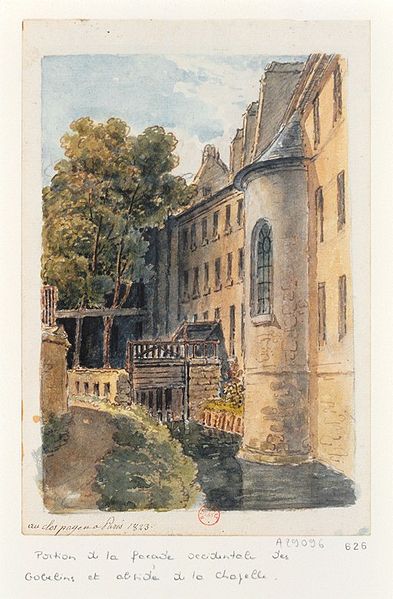 So how do the Gobelins name become so important in tapestry creation over the centuries?
The Gobelins Manufacture is a tapestry factory in Paris, who’s origins began way back in the 15th century,
Headed by Jehan Gobelin, the Gobelin family were fabric dyers from Rheims, a city in the Champagne-Ardenne region of France, 80 miles north east of Paris.
He and his family established the dye works business in the Faubourg Saint-Marcel region of Paris (between the 5th and 13th districts) on the Bievre River. He invested so much on his business that he was known as la folie Gobelin… 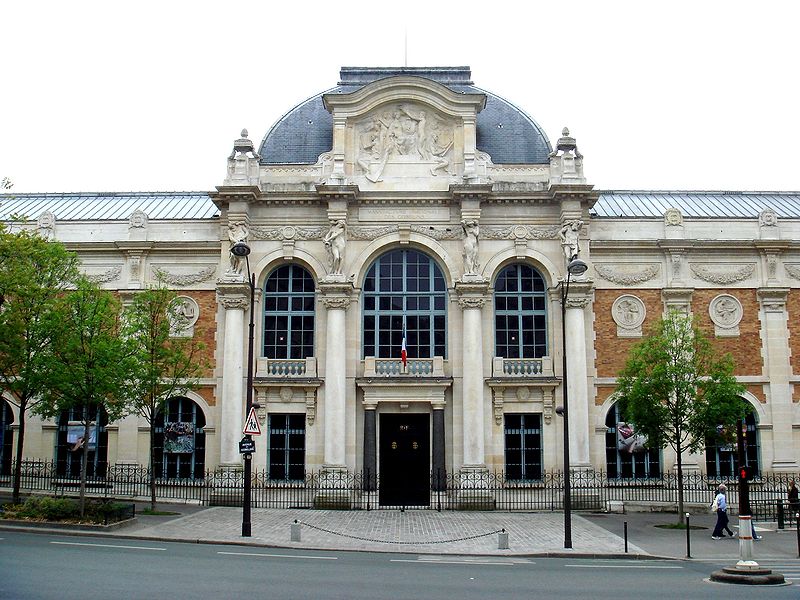 Fortunately for him, his business thrived and a tapestry production house was added beside the fabric dyeing business in the 16th century.
In the 3rd or 4th generation of the Gobelins family, many members bought titles of nobility.
Balthasar Gobelin went from title to title, from “treasurer extraordinary or war”, to “councillor secretary of the king”, to “president of the chamber of accounts”, to “lordship of Briecomte Robert” from King Henry IV.
This goes to illustrate the age old ability for anyone to purchase titles, if one was not born into the “royal line”!
The claim to fame for the Gobelins happened though with the help of his perception of royalty. 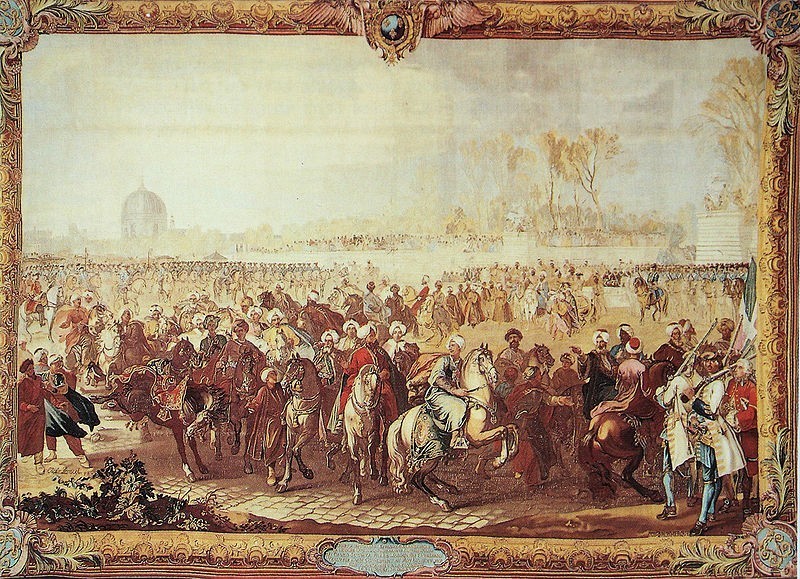 In 1662 the tapestry establishment was were purchased by Jean Baptiste Colbert, King Louis XIV’s minister of finance, on behalf of Louis XIV and was transformed into a general upholstery manufactory.
The artist in supervision of production was the royal painter, Charles Le Brun.
The official title became Manufacture Royale des Meubles de la Couronne (Royal Factory of Furniture to the Crown). The factory closed in 1694,  and reopened in 1699, this time to only produce tapestries.
In the 1600s and 1700s, the tapestries produced from this factory were considered to be the finest in all of Europe…
OK, here’s to idea 2:

Another effect is to have a high overview of the French landscape containing French palaces.
In this piece we see the grounds of Chateau de Versailles
The palace blends into the gorgeous hills and mountains and rolling clouds above. 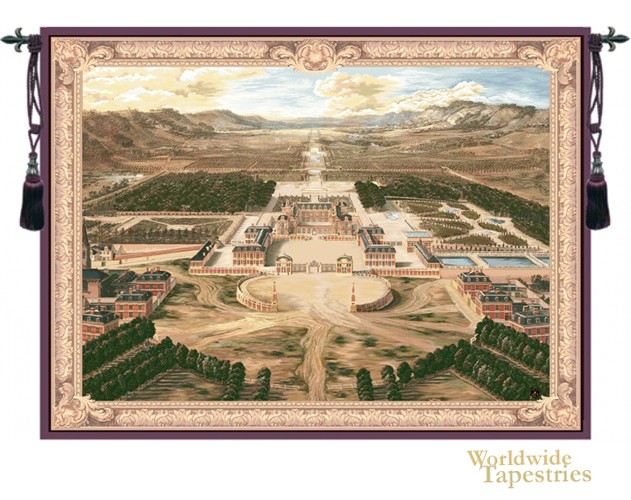 It is a dreamy landscape of French architecture with nature.
The overview is an artistic technique to show off the precision and patterns created by French architects in designing their structures.
Now, going back to the Gobelins, what was the subject matter of these tapestries?
They were initially the Sun King, Louis XIV, who reigned for 72 years.
Self focused or self serving?
Well, there’s more to it than meets the eye…
Louis XIV’s mark on the world was carefully constructed through beautiful art so that he could boast it to the rest of the world. In his lifetime, the medieval world of castles and medieval art was transformed into a more refined art through this period French art history.
It was even known as the King Louis XIV style, used by so many decorators when designing entire floor plans and decor for character homes and offices to this day 2012.
Just see the design and artwork in the Versailles castle above and you will realize the substantial changes in the refinement of art, and French art in particular, which in turn influenced the rest of the world.

Another way to portray French art is through depictions of famous events of history.
As an example, we see this tapestry showing the battles of Louis XIV, displayed of course with lovely countryside.
After all, art served the nobility and kings as well as art on its own.
Here we see luscious detail in the countryside foliage as well as in the elaborate garments: 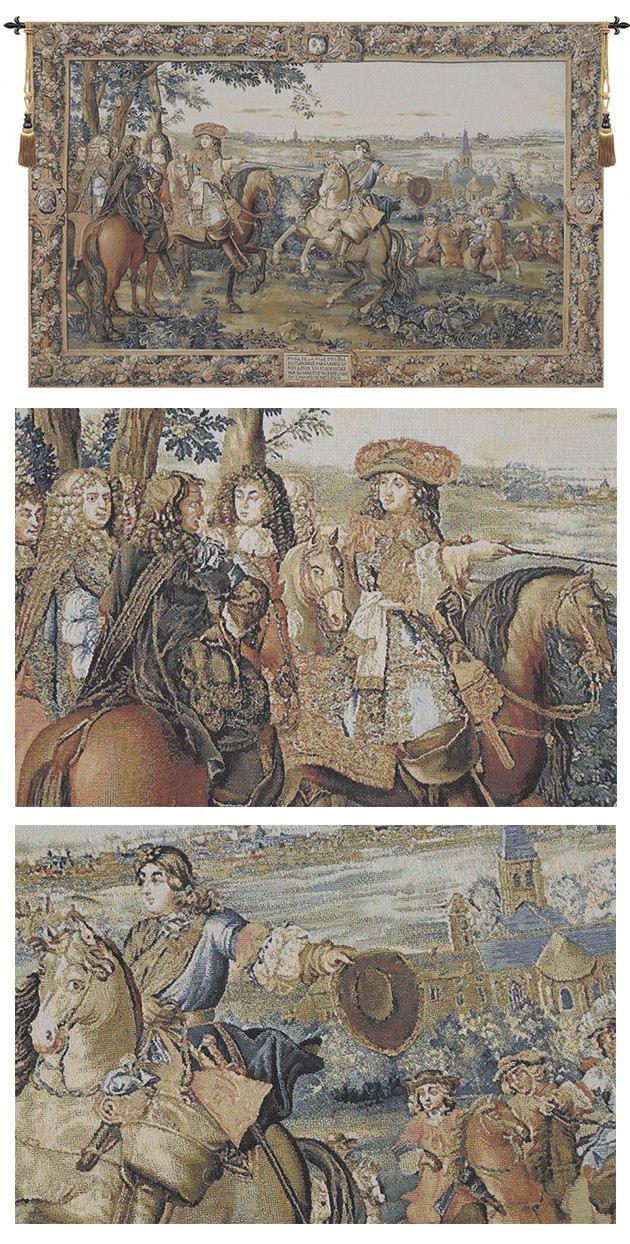 Now to place this into context, this was the time where Baroque music ventured into Classical music.
Imagine the art that would expect when you hear Bach’s works, and that is the artwork you would have seen. And imagine the art that would expect when you hear Mozart’s piano concertos and again, that is the artwork that evolved at this point in time.
In effect, King Louis XIV thought art was important enough, that he oversaw its very production to ensure that it reflected the good taste of… himself, on behalf of France.
This is why King Louis XIV has been admired as one of the first refined king of all the kings in the rich selection from history, with sumptuous taste, living fully as a king should, in his palace surrounded by art.
His first painter, or art adviser was Charles Le Brun (1619-1690).
Le Brun was declared by King Louis XV as the “greatest painter of all time” and was much supported by Louis XIV.
Topics of art included Louis XIV Equestrian portrait, Apotheosis of Louis XIV, The Assumption of the Virgin, and various other works related to Kings especially Louis XIV, the bible and other serious topics… though he did have a beautiful work of men with heads which were so hairy that they resembled lions.

Another way to display French art is through heraldry or royal crests.
These coat of arms was a way for artists to show their mastery of design of woven arts as well as to celebrate gorgeous motifs they loved.
In this piece for example, we see an extraordinary display of flowers, sceptres, fleur de lis, shields, crowns, and more to show off their love of coat of arms: 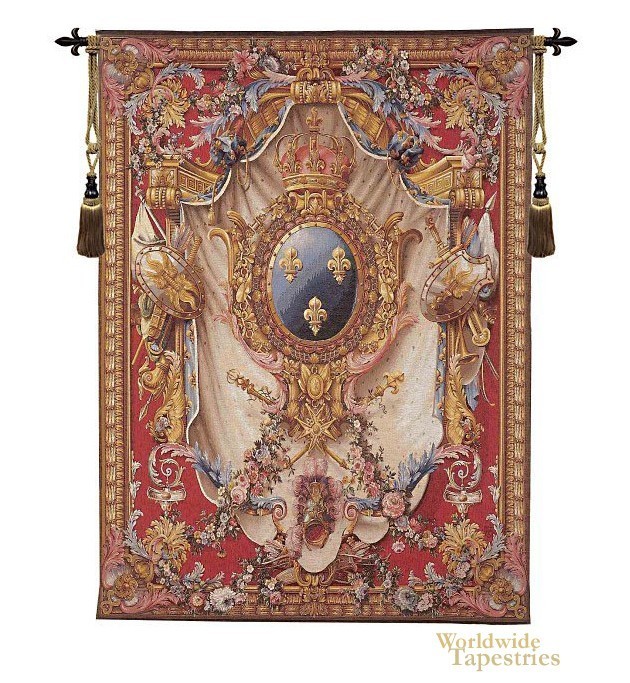 Coat of arms have been a prevalent method of carrying over traditions of symbpolism of family names through time.
Tapestries hung in castles were used for this purpose and were then used in more modern palaces as well.
Now in a home, you can use these crests to show the distinct effect of French design and art to transform a room.
Now, what happened to the subject matter of the art over time in France from this time of Le Brun?
It developed into a more frivolous and sometimes fantasy like world, especially when Francois Boucher came onto the art scene.
In 1755, Boucher was appointed head of the royal tapestry manufactory at Gobelins.
He later became the first painter of the king, King Louis XV in 1765.
The French style of art inevitably turned to the more romantic and sumptuous aspects of life, as was their romantic culture.
Again, does not art always reflect culture? In this way, the new subject matter of art was finally loosened.
Le Brun loosened his belt slightly in some works, but the topic of kings and the Virgin Mary was no longer the socially acceptable topics in art.

5. Scenes of life in the French countryside

Rustic scenes of country life became the subject prevalent at this time.
For once we see the celebration of ‘ordinary life’ in France instead of only the lives of nobility.
The first foray into social media perhaps?
Here we see Boucher devoting artistry to events of daily life in the countryside, such as a scene of romance between a couple: 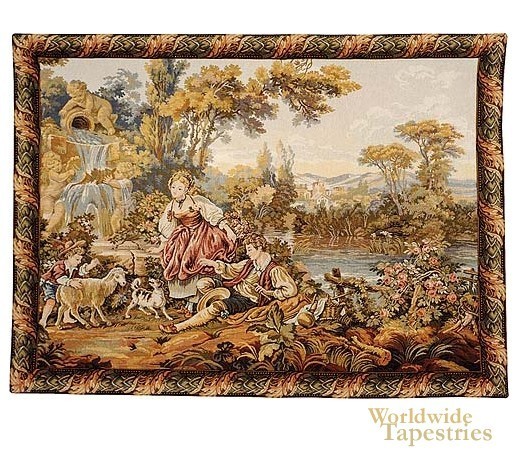 Yes, the simply life of villagers and accompanied by innocent children, goat and dogs.
It had to happen…
The shift of books into “secular” topics, also meant that art did the same.
A relief to many in France at the time for sure, as if there was an artistic outlet of the thoughts and feelings of the people, so see their fantasies in real life art as opposed to only their own imagination.
And to happen in France, meant romanticism and the topics of the every day and even romantic life of nobility.
So the Gobelins came from a brand of art production, in particular tapestry production which the Kings themselves endorsed and encouraged, to produce art which would reflect French standards meant to impress the rest of the world.
What the French bring to architecture and decor is like what sophisticated cheese bring to an ordinary platter of food.
There is an elegant and classical quality in “Louis XIV style”… It is elegant and grand at the same time, so characteristic of French art.
Moving onto the modern day, this classic style has become more modern, yet there is a French flavor to its decor that still has that tenuous and distant link all the way back to the elegance of the 16th and 17th century.
The art of the Gobelins, from Le Brun to Boucher and beyond, shows the way the French Kings have changed art forever, moving it from the medieval era to the classic and romantic era, which is timeless in their quality. 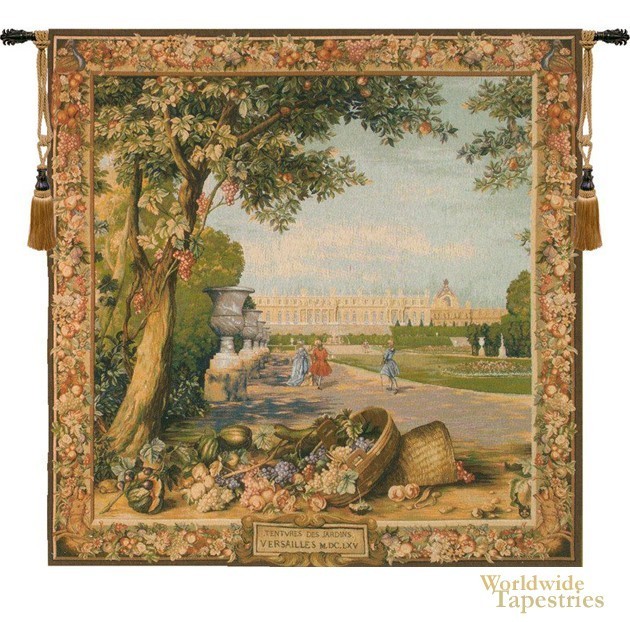 It is lush and gorgeous and is supposed to reflect the richness of royal life.
The timelessness of French architectural features and art which in the 21st century still impresses us with their sense of beauty.
Why?
It is due to the quality of construction of their form and design, and above all, that extra magic which appeals to the eye, at whatever era we are in.
Many suspect it is the beauty, akin to the beauty of nature, that instantly relaxes our brain waves into alpha frequencies when we see beauty, that makes us benefit and feel like we are in the moment, and in the present.

The French also loved to show medieval scenes of medieval life and events, often with royalty involved as well.
Here we see King Maximilien in the forest enjoying a hunt with his horses, horsemen in the hawking season in April.
The attention detail is incredible and composition is medieval in style and gorgeous. 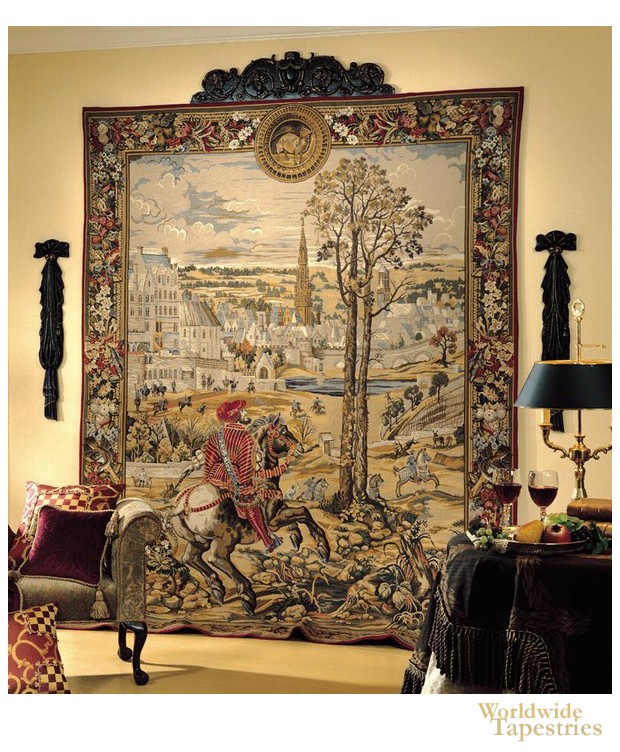 So these are some ideas to get you started.
So now you know the how the French style evolved from that which focused on royalty and life in palaces, to heraldry and romantic style of daily living, that is sought after by home decorators and offices for their beauty, their expression of beauty.
French art in its unique beauty can transform a room or home unlike any other, because of its beauty, elegance and historical significance of the art.
See all French tapestries here that you can use to transform your home decor, with tapestries based on the incredible Gobelins, Aubusson, Beauvais, Francois Boucher and more.
Use one of the ideas above to decorate your room or home with a gorgeous effect that you and your loved ones will love!
P.S. As references, some images above of the Gobelins Tapestry Production House and historical tapestry comes courtesy of public domain images from wikipedia.