The anthropologist Horace Miner once wrote about the Nacirema, a strange North American people he said all perform the exact same set of rituals in communal “shrine rooms,” but pretend to be doing it in almost total secret. He of course was making fun of Americans in public bathrooms, and the common practices […]

The anthropologist Horace Miner once wrote about the Nacirema, a strange North American people he said all perform the exact same set of rituals in communal “shrine rooms,” but pretend to be doing it in almost total secret.

He of course was making fun of Americans in public bathrooms, and the common practices that go on inside that are actually pretty weird when you think about them. Why, for example, is talking generally frowned upon? Why do those two-roll dispensers in stalls always run out at the same time? Why do guys spit in urinals?

To shed light on these mysteries, Science of Us combed through mountains of research on bathroom behavior and uncovered some revealing findings, from the most popular kinds of wall graffiti, to the gender dynamics of pee-formance anxiety, to important insights on the great under-over toilet-paper debate. Consider it the perfect reading material for when nature calls.

HOW PEOPLE CHOOSE THEIR STALL OR URINAL

Who chooses which stall, according to a survey of bathroomgoers’ habits:

Presented with that same trio, women:

But when the left stall is occupied, men:

Women, under the same circumstance:

Given a line of identical options, people “reliably prefer the middle one.” The problem is stalls or urinals in a line are rarely truly identical, and men tend to opt for whatever’s closest to the door, while women gravitate to those farther from it.

Men treat other men like objects. According to Erving Goffman’s seminal 1963 Behavior in Public Places, running into a friend in the bathroom often causes buddies to pay each other civil inattention — “enough visual notice to demonstrate that one appreciates that the other is present … while at the next moment withdrawing one’s attention from him so as to express that he does not constitute a target of special curiosity or design” — but running into them at the urinal dictates nonperson treatment, or pretending your friend’s part of the surroundings, an object “not worthy of a glance.” (Goffman said that talking is permitted as long as it’s done like you’re addressing the wall or no one in particular.)

Men also must abide by tons of unwritten rules. One academic codified the etiquette this way: “Do not stand directly next to another man at another urinal.” “Do not look at another user during urination, and, if possible, keep conversation to an absolute minimum.” “If you shake it more than twice, you’re playing with it.”

Men get pee-formance anxiety; women, not so much. There are two social phobias men have at a much higher rate than women: returning something to the store, and peeing in a public bathroom. And the closer men are to another person, the longer it takes them to get the flow going: In one study, the authors monitored a row of three urinals and clocked an average of 4.9 seconds if the subject was all alone, 6.2 if there was a one-urinal buffer, and 8.4 at close range.

A bull’s-eye can help reduce splatter. Putting a fly decal on the urinal can reduce spillage by as much as 80 percent.

Territorial men like to spit into the urinal before peeing. “It’s a way to appear stronger and mark your space,” says Boise State sociologist Robert McCarl. “Males are more concerned about turf than women are. You get a group of males together, and there is a lot of posturing going on.”

Women are more likely to duck into the men’s room than vice versa. But only because their lines are longer.

HOW PEOPLE BEHAVE IN BATHROOM STALLS

Stalls become a temporary hideout. According to a classic paper about bathroom rituals, bathroomgoers “may lay claim to any unoccupied stall in the bathroom,” but “once such a claim is laid, once the door to the stall is closed, it is transformed into the occupying individual’s private, albeit temporary, retreat.” Talking across stalls is a definite no-no — unless you’re female, in which case, according to these authors, it acts as a confessional in a sacred place.

Nobody likes an audience while defecating. In the above study, researchers never managed to observe a person pooping in an unenclosed toilet (but in some parts of the world, women don’t have much choice).

On average, women spend twice as long as men do on the toilet. That’s according to toilet expert Chuck Gerba; another study found women outlast men by an average of 61.5 seconds.

But women really don’t like sitting on the toilet. Only 2 percent of women say they sit directly on the toilet seat in public restrooms; 85 percent hover, or “crouch,” as the paper put it.

They do it differently in Europe. Stall architecture varies from culture to culture, according to Cornell architecture professor Alexander Kira: European water closets are fully enclosed, while the standard design for American stalls is two five-foot walls and a door that start a foot from the ground.

THE MANY — WELL, NOT THAT MANY — SUBJECTS OF BATHROOM GRAFFITI

It’s mostly raunchy, at least in men’s rooms. Alfred Kinsey found that 86 percent of inscriptions in men’s bathrooms were erotic in nature, compared to just 25 percent in women’s bathrooms. A later study showed that the sexual revolution hadn’t made women’s graffiti any smuttier. The bulk of what’s in men’s bathrooms (75 percent) is also homosexual in nature. In addition, men compose graffiti that’s more likely to proposition readers, more likely to be a stand-alone doodle, and more likely to contain the artist’s initials. Females compose graffiti that’s more romantic, more interactive, but also way more likely to insult rivals. And when they do write insulting graffiti, they focus on physical appearance and infidelity.

There’s a virtuous side to bathroom graffiti, too, though. Sometimes the scribbling serves a nobler purpose, says one study: soliciting advice, encouraging and consoling others, and calling male dominance into question.

HOW PEOPLE USE TOILET PAPER

Women use way more TP than men. They use an average of seven toilet-paper squares per visit, and men use two, according to Chuck Gerba.

Folders outnumber crumplers. Nearly twice as many people fold toilet paper than crumple it, although being young, spending longer in the bathroom, and having two X chromosomes all increase your likelihood of crumpling.

Over-hangers outnumber under-hangers. Cottonelle famously found that 72% hang the toilet paper roll so the free end comes down over the top, while 28% hang it so it dangles from the bottom. In another study, 68% of respondents preferred TP to hang over, while 32% preferred bottom-hanging. Also, high-earners ($50,000-plus, in 1989 dollars) preferred over (60%), while 73% of people making less than $20,000 preferred under. (Asked what this means, one author said, “I don’t know, but it’s sure interesting.”)

BATHROOM CLEANLINESS — AND HOW PEOPLE COPE WITH ITS ABSENCE

There’s a real (and real gross) catch-22 to hand-washing. Using the soap from dispensers is a terrible idea, since a quarter of them are so laden with fecal and coliform bacteria that your hands could end up filthier than before you washed them. A British public-radio exposé on drug use found traces of cocaine on 92 percent of baby-changing stations. And cleanliness is important, but not that important: Twenty-nine percent of respondents to one survey said they’d never go back to a restaurant with unsanitary bathrooms, and the percentage of never-returns increases with age. Twenty percent of 18- to 34-year-olds, but 33 percent of people 35 and older.

When it comes to bathrooms, people define unclean in many different ways. And not necessarily by the amount of filth: Eighty-four percent say a bathroom is gross if a dispenser is out of toilet paper, and 76 percent will go there if the soap is empty. In 2012, Beijing passed a two-fly rule for public toilets: Any more than two per fixture, city officials advised, is unacceptable.

Women wash a lot more than men do. Though male minorities wash as much as white women.

Signs reminding people to wash work for women, but not men. At least according to one study in which the percentage of females who washed their hands jumped from 61% to 97% as a result of signage, while signs were associated in a drop among men, from 37% to 35%.

Everyone lies about hand-washing. Men and women alike overstate how often they wash their hands, though according to one survey, only 56 percent of us even bother claiming to wash every time. Another study discovered that a mere 32 percent of food-handlers wash their hands, even though it’s required.

And when people do wash their hands, they aren’t very good at it. Only 5 percent of people do it thoroughly enough to kill germs, though this varies by location: 97 in 100 people at Toronto International Airport washed after using the bathroom, while at JFK, it was 63 in 100.

But, being germ freaks, people at least minimize hand use in the bathroom. According to a survey by a bathroom fixtures company, 64 percent of Americans flush public toilets with their feet, 60 percent open the door handle with toilet paper, 48 percent shut the door with their butt, and 39 percent use elbows whenever possible to avoid hand contact.

Paper towels are actually the most hygienic option for drying hands. Research shows an unfortunate side effect of hand dryers is that they blast bacteria everywhere. In one experiment, bacteria counts in the air were 27 times higher near hand dryers than they were by paper-towel dispensers, and high-powered jet dryers made things four and a half times worse than normal dryers.

Tue Apr 28 , 2020
Welcome to Street Decor!We have been in business since 1991 selling high quality banners and holiday decorations around the county. Please click on the categories below or the images below to see what we have to offer.  We also would welcome the opportunity to talk and answer any questions you […] 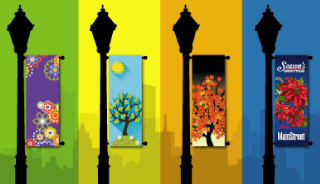